A Run for your Money

Also available as part of a group of four and twelve.

A Run for your Money pop art print

Stylish pop art of Donald Houston & Meredith Edwards from the Ealing comedy film “A Run for your Money”, part of the Welsh Ffilm & Ealing Comedies collections by Art & Hue.

Based on a story by Clifford Evans, “A Run for your Money” sees two Welsh miners (with leeks no less) win a newspaper competition and head to London to collect their prize money and tickets to see Wales play an international rugby match against England at Twickenham. It was filmed across London and in the Welsh village of Nant-y-moel in the Ogmore Valley.

Billed as “a spree with a harp and a harpee”, “A Run for your Money” is Meredith Edwards’ screen debut and the second film of Donald Houston. The film also stars Alec Guinness, Moira Lister, Joyce Grenfell, & Hugh Griffith, and was nominated for a BAFTA.

The fourth Ealing comedy released in the same year, “A Run for Your Money” opened at the Haymarket Gaumont and Marble Arch Pavilion cinemas on the 24th of November 1949.

Born in Tonypandy in the Rhondda valley, Donald Houston also appeared in “Dance Hall” with Diana Dors & Eunice Gayson, “Doctor in the House” with Dirk Bogarde & Shirley Eaton, “Room at the Top” with Laurence Harvey, “Twice Around the Daffodils” with Kenneth Williams, “The 300 Spartans”, “Carry On Jack” with Charles Hawtrey & Cecil Parker, “Where Eagles Dare” with Richard Burton, “Voyage of the Damned” with Orson Welles & Vikki Richards, “The Sea Wolves” with Roger Moore, David Niven, & Patrick Macnee, and “Clash of the Titans” with Maggie Smith.

A prolific actor, after his debut film “A Run for Your Money”, Edwards appeared in “The Blue Lamp” with Jack Warner, “The Lavender Hill Mob” with Stanley Holloway, Alec Guinness, Sid James, & Audrey Hepburn, “The Cruel Sea” with Stanley Baker, “Mad About Men” with Glynis Johns & Margaret Rutherford, “Dunkirk” with Richard Attenborough & Bernard Cribbins, “Tiger Bay” with Rachel Thomas, “The Trials of Oscar Wilde” with John Fraser, “Doctor in Love” with James Robertson Justice, Liz Fraser, Joan Sims, Carole Lesley, & Fenella Fielding, “Only Two Can Play” with Peter Sellers, “This is My Street” with Ian Hendry, and “The Great St Trinian’s Train Robbery” with Frankie Howerd & Margaret Nolan, to name a few.

Also available as part of a group of four: 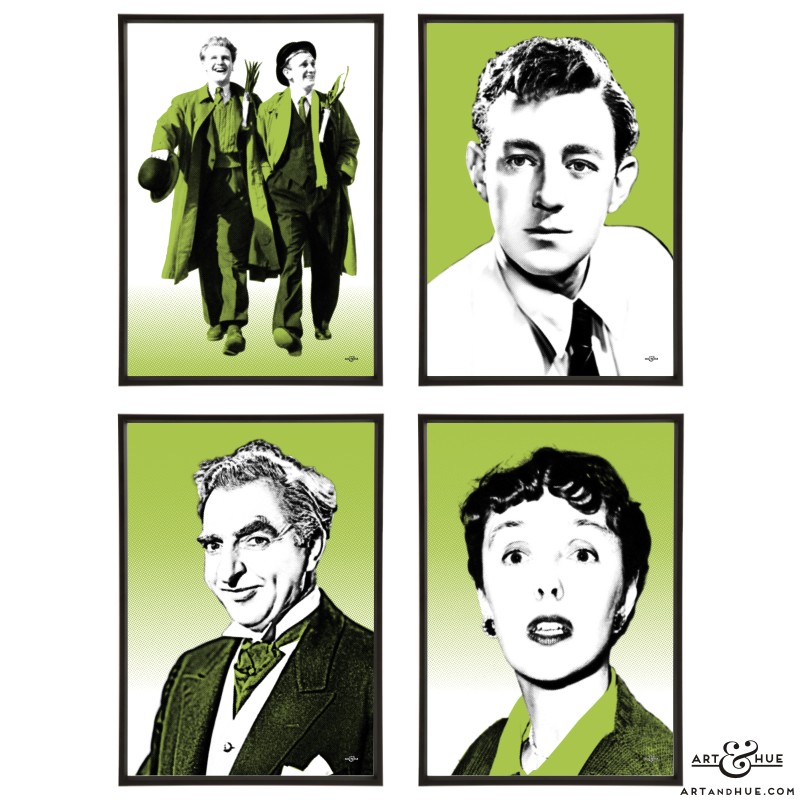 An official collaboration with Studiocanal, the Welsh Ffilm pop art collection is available in 3 sizes & 21 colours, printed on museum-quality archival card of 310gsm, made from 100% cotton, with fine-art pigment inks for longevity, exclusively by Art & Hue.

A Run for your Money at Amazon