2020 marks 65 years of the classic Ealing comedy “The Ladykillers“.

To celebrate the anniversary of Ealing Studios’ flawless black comedy, STUDIOCANAL is releasing the first ever 4k restoration of the 1955 film, created from the original 3-strip Technicolor negative, showcasing director Alexander Mackendrick’s vision in its full glory.

The film will be released in selected cinemas on 23rd October 2020, including the Art Deco Odeon in Covent Garden, and the 5-disc 4K UHD Collector’s Edition (and standard Blu-ray and DVD) will be released on the 9th November 2020, available to pre-order now at Amazon.

Art & Hue had the pleasure to create six artcards, based on “The Ladykillers” pop art collection but in colours exclusive to the new release, which will be in the 4K UHD Collector’s Edition, featuring “The Ladykillers” gang and Mrs. Wilberforce.

“The Ladykillers” follows the criminal capers of a group of small-time crooks, taking on more they can handle in the form of their sweet, but slightly dotty, elderly landlady Mrs W.

When Alec Guinness and his crew turn up at Mrs Wilberforce’s to rent rooms in her rickety Victorian house next to King’s Cross station, she’s unaware that the crew are planning a heist.

Masquerading as an amateur string quintet looking to rehearse, Mrs W. soon cottons on to the gang’s crime and threatens to report them to the police, at which point it’s decided one of them must become a lady killer to keep her quiet. 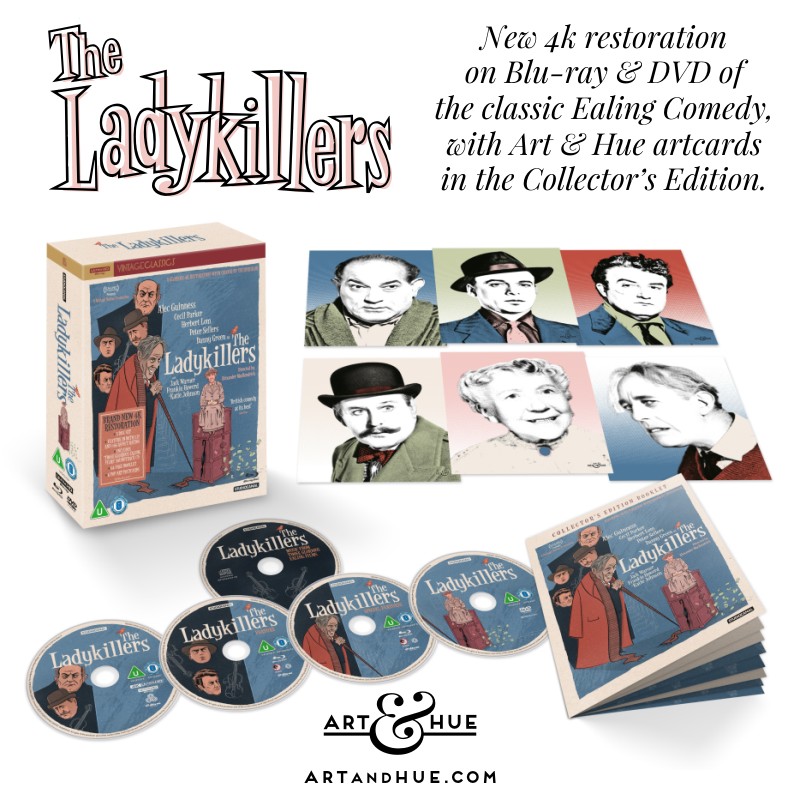 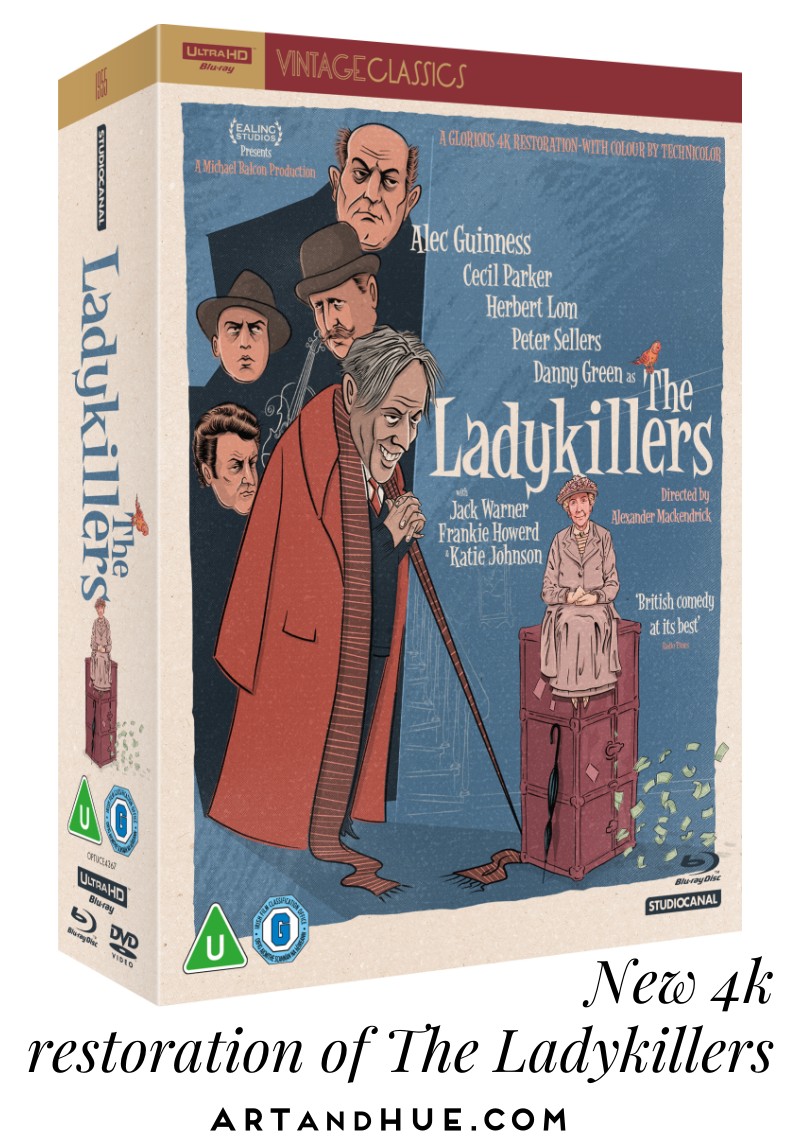 With an all-star cast of classic British actors including Alec Guinness, Cecil Parker, Herbert Lom, Peter Sellers, Danny Green, and the archetypal policeman Jack Warner, “The Ladykillers” is fondly considered to be one of the best Ealing comedies.

Directed by Alexander Mackendrick, who also directed the Ealing comedies “Whisky Galore!” and “The Man in the White Suit“, the wealth of acting talent in “The Ladykillers” warranted its own pop art collection by Art & Hue alongside other Ealing comedies.

With supporting actors Frankie Howerd and Kenneth Connor, “The Ladykillers” was to be Katie Johnson’s penultimate film which earned her a British Film Academy award for Best British actress at the age of 77.

The writer William Rose also won a Bafta Award for “The Ladykillers”, for Best British Screenplay, as well as a nomination for an Academy Award.

As “The Ladykillers” was the last Technicolor three-strip film shot in the UK, STUDIOCANAL felt it was important that the original camera negative was used for a restoration to serve as the best version of the film since its original release.

The restoration began by scanning the original 1950s Technicolor three-strip camera negative. The three strips then had to have their colour separations combined to produce the final colour image.

One of the biggest issues to overcome was aligning the colour separations together, initially an automated process, but also requiring a huge amount of manual tweaking on a shot by shot basis. Some sections also suffered from scratching. In total, the film benefitted from over a 1,000 hours’ worth of 4K manual and automated digital restoration.

A 35mm Technicolor print was used as a reference for the colour grade to ensure the new HDR Dolby Vision master stayed true to the films original 1950s “Colour by Technicolor” look. 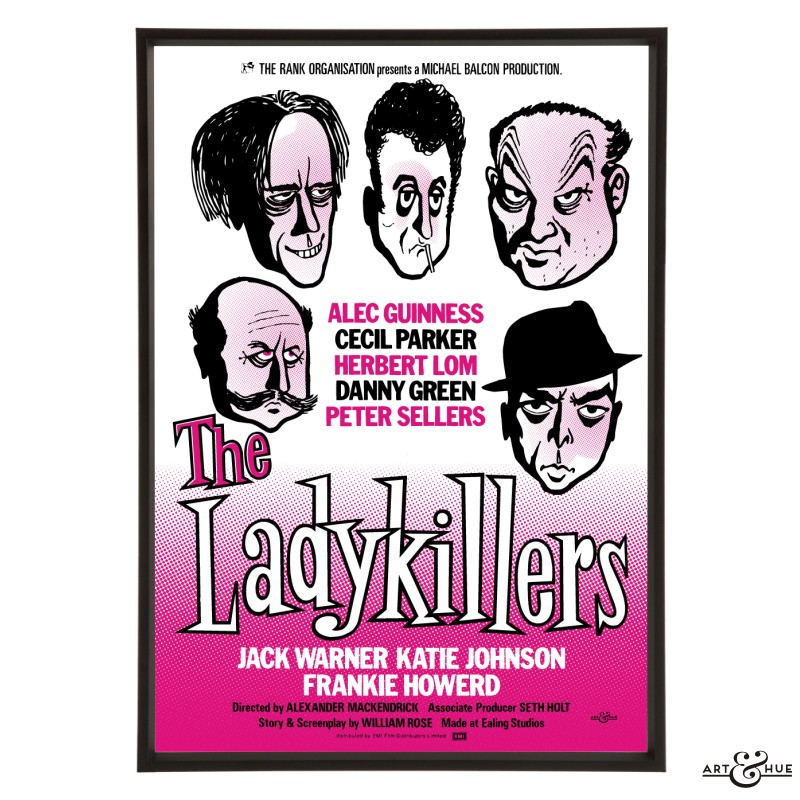 “The Ladykillers” World Premiere took place at the Odeon on London’s Leicester Square on the 8th of December 1955 and, 65 years on, the black comedy endures as a cinema classic.
This 4k restoration is a great way to celebrate the film’s 65th anniversary and preserve the film for generations yet to discover the charms of “The Ladykillers“.

Pre-order the restored film at Amazon and discover “The Ladykillers” pop art collection by Art & Hue, available in 3 sizes and many colours. 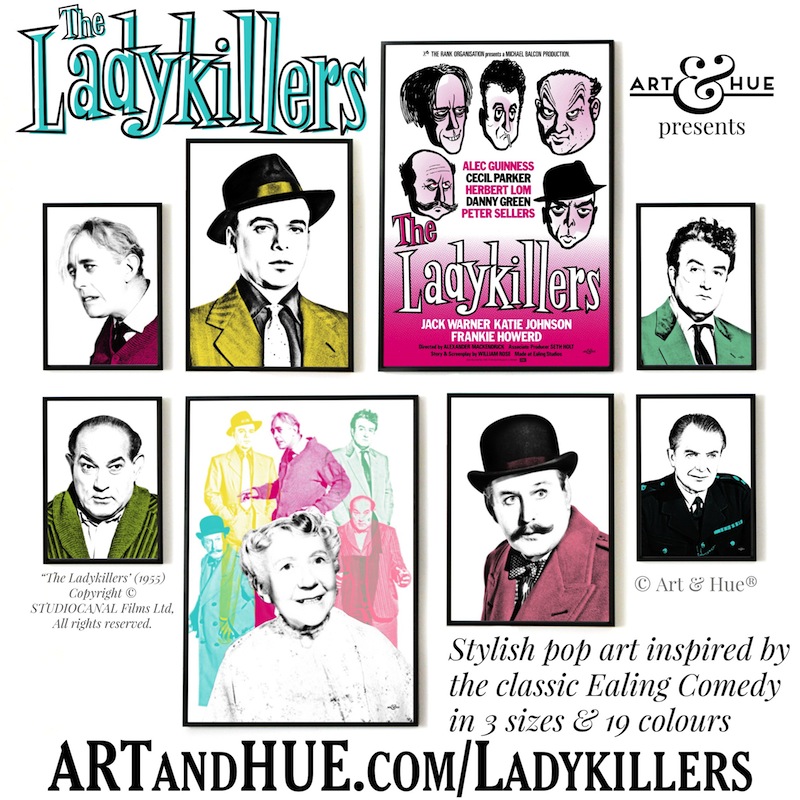 Some of the wonderful bonus extras included in The Ladykillers new 4k restoration include:

“The Ladykillers” restoration will be shown on the big screen at cinema venues nationwide – check your local listings for updated info.

Some of the venues scheduled to show the film in October / November include:

The Ladykillers 4K at Amazon