Stylish pop art print of drag icon Danny La Rue from his starring role in the 1972 comedy “Our Miss Fred”.

Rather than “female impersonator”, Danny La Rue preferred the term “comic in a frock” and featured in many theatrical productions, such as “Hello Dolly” and pantomimes, as well as in films and TV shows.

Danny La Rue was one of the country’s most popular performers with a career spanning seven decades, and was awarded an OBE in 2002.

Danny La Rue also appeared in the comedy musical film “Every Day’s a Holiday” with John Leyton & Liz Fraser, “BBC Play of the Month” with Ronnie Barker, “Come Spy with Me” with Barbara Windsor & Irene Handl, and “The Coward Revue” with the two Ronnies, Ronnie Barker & Ronnie Corbett. 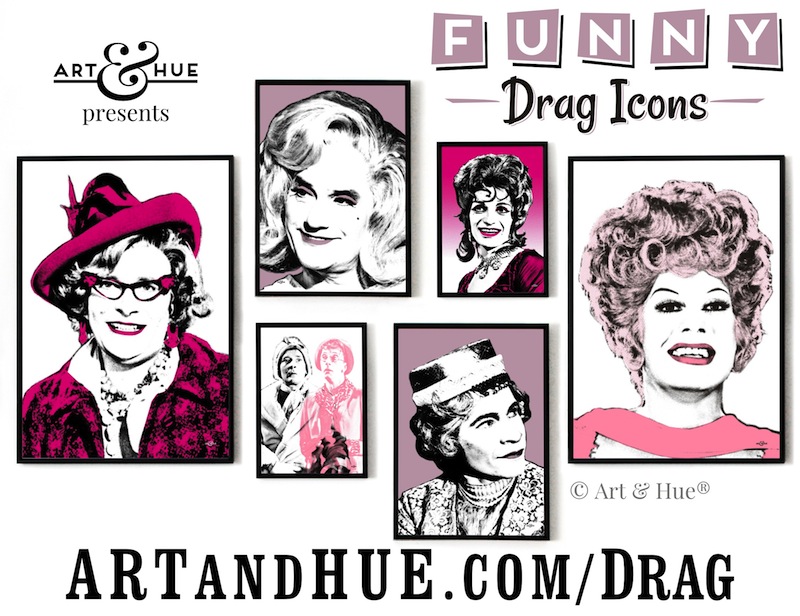 An official collaboration with Studiocanal, this print is part of the Funny Drag Icons collection of stylish pop art prints inspired by classic British drag artistes from film & TV comedies, featuring Art & Hue’s signature halftone style (halftone is an age-old technique that uses dots to make up the printed image, similar to newspapers or comic books).

As well as the Drag Icons collection, discover the Funny Men and Funny Women pop art.

Exclusively by Art & Hue, the Drag Icons pop art collection is available in three sizes and 20 colours, all printed on museum-quality archival card of 310gsm, made from 100% cotton, with fine-art pigment inks for longevity.