The daughter of national treasure Thora Hird, Janette carved out a successful career in many British & American films but her leading-lady role in “School for Scoundrels” is one that is perhaps most fondly remembered as a particular fan-favourite.

Initially a child actress who practically grew up on a film set, Janette appeared in many films including “The Galloping Major” with Sid James & Charles Hawtrey, “The Magic Box” with Richard Attenborough, “As Long as they’re Happy” with Diana Dors & Susan Stephen, and the musical “The Good Companions” with Carole Lesley & Joyce Grenfell.

Hitting her stride in classic film comedies including “School for Scoundrels” and “Double Bunk” with Sid James & Ian Carmichael, Janette worked with Terry-Thomas in “His & Hers” & “Happy is the Bride”, which also co-starred Ian Carmichael, and with one of the original Avengers Ian Hendry in “The Beauty Jungle”. 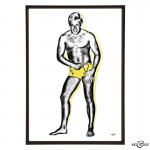 Her now-cult appearance in “The Day of the Triffids” was forever immortalised in the lyrics of the song “Science Fiction/Double Feature” in The Rocky Horror Picture Show which starred Peter Hinwood as Rocky.

Withdrawing from acting to raise a family, Janette’s film presence was missed but her enduring performances, particularly in the fun romantic comedies of the 50s & 60s, will forever be enjoyed.

Art & Hue had the pleasure to meet the adorable Janette Scott at a screening of “School for Scoundrels” at the very location where the classic tennis matches were filmed.

Read more about the screening here.