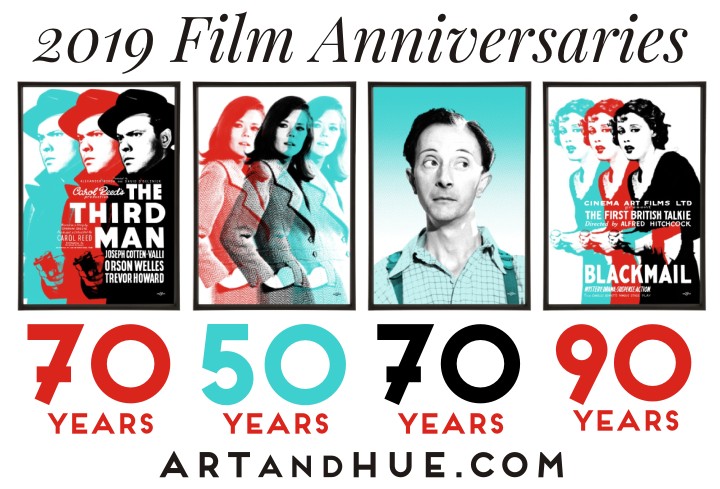 2019 marks several anniversaries of classic British films – from comedies to spy thrillers, this year will celebrate cinematic milestones of productions that still impact well beyond their initial release. Alfred Hitchcock’s “Blackmail” starred Anny Ondra (albeit dubbed with the voice of Joan Barry) as a woman blackmailed for defending herself.

Production started in April 1929 and during May, the Duke & Duchess of York, Queen Elizabeth II‘s parents, visited Elstree to witness Hitchcock in action filming scenes for “Blackmail”.

First screened to press & cinema distributors on the 21st of June 1929 at the Regal Cinema at Marble Arch, the film premiered at the Capitol cinema in London on the 28th of July 1929. “Blackmail” was one of the most successful releases of that year, received critical praise, and featured set pieces we’ve come to associate with Hitchcock’s unique style of thriller.

Based on Charles Bennett’s 1928 stage play of the same name, it was the start of an ongoing film partnership when Hitchcock engaged Bennett to write the screenplays for “The Man Who Knew Too Much”, “The 39 Steps”, “Secret Agent”, “Sabotage”, “Young and Innocent”, and “Foreign Correspondent”.

Art & Hue’s pop art print of “Blackmail” is available in 3 sizes, with or without text, and 30 colour options. Lauded at the time of release and still frequently included in most “best film” lists, “The Third Man” is a masterpiece of British film noir.

Although it’s classed as a British film, as it was written by Graham Greene, directed by Carol Reed, and produced by London Films, the cast of American & European actors filmed in Austria by an Australian cinematographer make the film a collaboration of international talent.

Considered by some to be the greatest film of all time, the atmospheric zither music from “The Third Man” is instantly evocative of shadowy criminality at the birth of the Cold War.

The Grand Gala World Premiere was held at the Ritz Cinema in Hastings, East Sussex, on the 1st of September 1949.

Art & Hue’s pop art print of “The Third Man” is available in 3 sizes, with or without text, and 28 colour options. “On Her Majesty’s Secret Service” Regarded by many to be the best Bond film, “On Her Majesty’s Secret Service” has it all – Diana Rigg, Joanna Lumley, Anouska Hempel, Verner Panton lighting, a mountain-top lair, a Christmas song, a beautifully poignant love song by Louis Armstrong, and arguably the best John Barry soundtrack ever.

Appearing in the final James Bond film of the 1960s, George Lazenby got a mixed response at the time (one critic of Lazenby’s wrote that they should have have shot James and let Diana Rigg live to continue as Bond, Tracy Bond) but the film has stood the test of time and endures as a classic.

The film has many fans and admirers including directors Steven Soderbergh and Christopher Nolan, and actor & writer Mark Gatiss, who rank it as the best cinematic outing of 007.

Despite only making one appearance as James Bond, George Lazenby‘s 1969 film is a memorable one. Diana Rigg was indubitably the star of the film following the global success of The Avengers, and having a stronger, atypical Bond “girl” creates a more powerful, & heartbreaking, relationship with Bond.

Unlike Honor Blackman and Diana Rigg, Joanna Lumley appeared in a James Bond film before becoming an Avenger herself in 1976.

In “OHMSS”, Joanna draped herself elegantly into an armchair on Piz Gloria, Blofeld’s mountain-top lair, playing a glamourous Bond-girl and one of the “Angels of Death” before she was cast in “The New Avengers”.

A much-loved fan-favourite, “On Her Majesty’s Secret Service” endures as one of the strongest ever Bond films. 70 years ago in 1949, Ealing Studios released four comedy films in close succession and the classic British film institution of the Ealing Comedies was firmly established.

The studios had released comedies previously, such as “Hue & Cry” in 1947, but Ealing’s prolific output in 1949 was a boom period for the studios, with critical and commercial success. 1949 saw the release of classic films “Passport to Pimlico“, “Whisky Galore!“, “Kind Hearts & Coronets“, and “A Run For Your Money“, all within the space of seven months.

The films employed a regular cast similar to repertory theatre with actors & actresses being used across several films. Alec Guinness, Stanley Holloway, Joan Greenwood, Gordon Jackson, Alastair Sim, Naunton Wayne, and Basil Radford all appeared in more than one of the Ealing Comedies.

Years before he became synonymous with the Carry On films, Charles Hawtrey appeared in “Passport to Pimlico” with Margaret Rutherford, and before Audrey Hepburn became an international icon, she had a bit-part in “The Lavender Hill Mob”.

Frankie Howerd and Peter Sellers both appeared in “The Ladykillers” and Sid James was in “The Titfield Thunderbolt” and “The Lavender Hill Mob”.

Benny Hill was the star of the 1956 Ealing Comedy “Who Done It?” which also featured Charles Hawtrey and Irene Handl. The sharp humour and situations of the films still stand up to this day and the Ealing Comedies endure as a much-loved British cinematic institution.