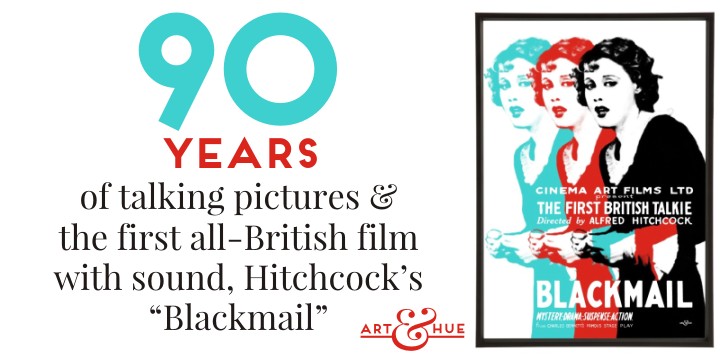 The film premiered at the Capitol cinema in London on the 28th of July 1929, 90 years ago today.

Alfred Hitchcock’s “Blackmail” starred Anny Ondra (albeit dubbed with the voice of Joan Barry) as a woman blackmailed for defending herself.

Production started in April 1929 and during May, the Duke & Duchess of York, Queen Elizabeth II‘s parents, visited Elstree Studios to witness Hitchcock in action filming scenes for “Blackmail”.

First screened to press & cinema distributors on the 21st of June 1929 at the Regal Cinema at Marble Arch, the film premiered at the Capitol cinema in London on the 28th of July 1929.

“Blackmail” was one of the most successful releases of that year, received critical praise, and featured set pieces we’ve come to associate with Hitchcock’s unique style of thriller.

Based on Charles Bennett’s 1928 stage play of the same name, it was the start of an ongoing film partnership when Hitchcock engaged Bennett to write the screenplays for “The Man Who Knew Too Much”, “The 39 Steps”, “Secret Agent”, “Sabotage”, “Young and Innocent”, and “Foreign Correspondent”.

Art & Hue’s pop art print of “Blackmail” is available in 3 sizes, with or without text, and 30 colour options.