On This Day: The Italian Job

Today marks 50 years since the release of “The Italian Job”.

Starring Michael Caine and featuring the iconic British Mini Coopers, the film has endured as a cult classic.

The unusual combination of Noel Coward, Michael Caine, and Benny Hill planning a bullion raid in Italy resulted in memorable scenes of minis driving where they shouldn’t – through shopping arcades and across rooftops.

The audience gets behind Michael Caine’s daring crew and wishes them to succeed with their criminal endeavours but, given the morality of the time where crime couldn’t be shown to pay, the film ended on a literal cliff-hanger to keep both censors and cinema-goers (somewhat) happy. 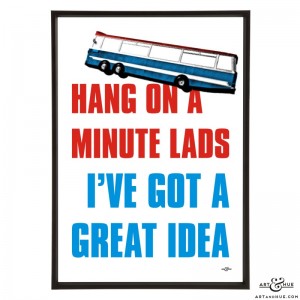 The censors can envisage the Italian police catches up with the gold-laden bus, whereas the audience, most of whom would have been rooting for the gang, can hope that they get out of their precariously-balanced predicament.

Filled with football fans and shot through with the rousing song by Quincy Jones, “Getta Bloomin’ Move On! (The Self Preservation Society)”, the film is bursting with a confident British swagger, like a football-mad nation that owned the 1960s and had won the previous World Cup.

If you fancy re-watching “The Italian Job”, or discovering the film anew, it’s available on Blu-ray & DVD from Amazon or via download at iTunes.

If you wanted to watch the film on today’s anniversary, Sky viewers can download it on demand or watch it today on Sky Select at 2.40pm this afternoon and 8pm this evening.

“Get your skates on mate!”

The Italian Job on Blu-ray & DVD

You are now leaving Art & Hue
Art & Hue is not responsible for the policies or content of any third-party sites. As an iTunes affiliate, Art & Hue earns from qualifying purchases & Apple will place a cookie on your device to track purchases on their site. #ad

The Italian Job on iTunes