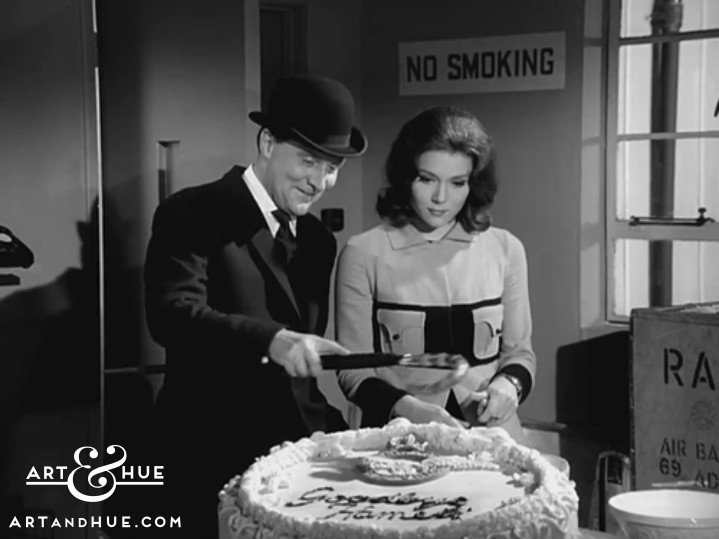 During an era when women were expected to defer to the superiority of men, Emma Peel proved an equal, or a superior, frequently outwitting them intellectually and beating them physically – Diana Rigg even made the record books as the first female to use the martial art Karate on television.

Alongside her impressive film and TV appearances, she’s had a distinguished theatre career of performances filled with strong female roles (I had the pleasure of seeing her Martha on the Aldwych – not a euphemism, she enthralled in “Who’s Afraid of Virginia Woolf”).

The only “Bond Girl” strong-minded enough to marry James Bond, she continues to portray women who know their own mind as the fierce Lady Olenna Tyrell in Game of Thrones.

I had the pleasure of meeting Diana Rigg when the BFI invited Art & Hue to install a pop-up exhibition of The Avengers pop art to coincide with a screening of “The House That Jack Built” followed by an on-stage interview with the actress.

It was great to meet her, present her with The Avengers pop art to take with her (which thankfully she loved!), and it’s wonderful to know that she has the pop art in one of her homes (there was a mention of her French home).

A delightful coincidence is that her birthday falls on the same day that The Avengers episode “The Hour That Never Was” wrapped filming back in 1965. The image above, featuring a nice big cake, is from that very episode.

It’s also the same day that “The £50,000 Breakfast” wrapped filming 50 years ago in 1967, the episode where Emma Peel wore the same coat in the image that inspired the Triple Emma pop art print.